Warped Journal – Two Lesbians and a Christian in One Tent

People assume that homosexuals and Christians are like oil and water.

The Oil
Christians are invasively judgmental and arrogantly burst their biblical battering ram of self-defined righteousness through any door that closes itself to its homogenous and tunnel-visioned worldview. They sit in a holy huddle and chisel on stone tablets antiquated misinterpretations of what is right and what is wrong, and then they impose those internally defined group rules on those outside of their condescending clique. Moreover, they claim these “non-believers” will be sentenced to absurd, eternal punishment for disobedience to rules they hadn’t even consented to abiding. Christians are like Afghani policemen trying to enforce foreign laws on American soil. I’m not your citizen; this isn’t your jurisdiction; GTFO.

The Water
Homosexuals assume Christians are Afghani policemen violating their territory with tear gas grenades, riot shields, and knight sticks. They get trigger happy and preemptively unload their own full clip of hatred and bigotry to counter the anticipated invasion of anyone who might be associated with that close-minded cohort.

The Result
A clear line partitioning human beings who have more in common than they have separating them. 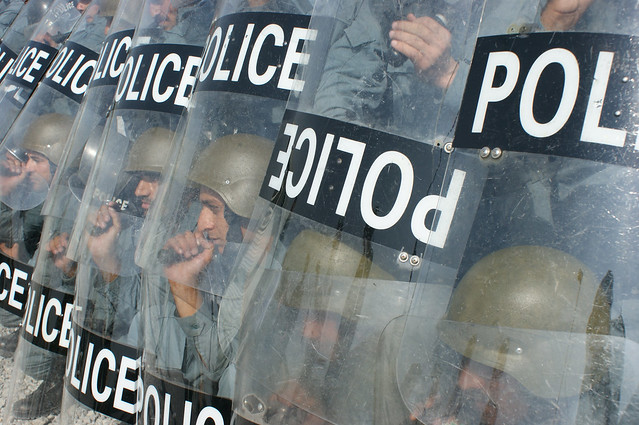 I had a lesbian couple walk into my tent in Indiana. We sat in the back on some stools, and I listened to their stories. One of the girls was handling hell at home. She was living at her parents’ house with her girlfriend, and her parents had been emotionally edging them out for months. It escalated recently, and they started blurting overtly homophobic comments and overall disapproval of their life paths, choices, and relationships. Adding to the mix feelings of worthlessness and loneliness, she began to believe she couldn’t reach the future she envisioned because she was broke, struggling, and stuck somewhere she didn’t want to be. She was treading water while her hope leaked into the ocean of stress she was drowning in.

Her girlfriend slipped into addiction to drugs and alcohol and the partying lifestyle when her family imploded earlier in life. She had a history of self-harm and suicidal thoughts. Relationship after relationship had failed and left her callous. As a result, she built high stone walls on the outside because her heart was weary from the betrayal.

One was desperately searching for a life raft, and the other was tired of ones that claimed to help but left her more stranded in the end.

I heard and saw and listened and hurt. Forty five minutes of watching the garbage pile up, and they had only shown me a fraction of their compound. Even one bulldozer of a pep talk wouldn’t dent the overwhelm. But I wanted to do something to help them. My heart was heavy just hearing what they were holding up, and I wanted to give them something more than fleeting inspiration that would fade before they left the front gate. So I asked…

I could see the horror flash before their eyes. My blue tanktop morphed into a flak jacket, and I was an oncoming Afghani policeman tossing a tear gas grenade into the middle of the conversation. They physically retracted as if it exploded in the center of our stool triangle. I assured them my intentions were to ask God to bless them and offer them tangible hope to hold onto in the midst of their storm. After getting to know them so well, I felt like their friend, and I wanted to help. So, they agreed, we prayed together, we hugged, and they left.

An hour later, they stood at the edge of my tent on the verge of tears. They circled the festival and felt like just another number in a crowd of twelve thousand, a customer with the potential to spend on merch. They came back because they didn’t feel that in our tent. So we picked up our conversation where we left off, and the pile of hurt and hopelessness only mounted. Another fifteen minutes passed, and my heart just broke for them. I couldn’t sit and listen to things get worse. I needed to do something to make things better.

“Can I share with you the hope I know?”

I shared my story. And as a Christian, it involved God. I, too, went through a mountain of struggles. A chasm in my soul of inadequacy that I tried to fill with giant boulders of addiction. I met God, but He’s not a pill. My life actually got worse over the next year. And I crashed at rock bottom, did things I was downright ashamed of, and hid further in myself. Four years, twelve steps, and countless adventures later, I look back at my own story, and I see a theme: God was with me. From the moment I found Him, I couldn’t shake Him. No matter how far I ran, no matter how low I sunk, no matter how hard I tried to hide. He was always with me. Even when I couldn’t feel Him, I was always one turn away from seeing Him again. And in my darkest times, He knew me, and He loved me, and He chose to stay with me. Real hope is constant, unchanging, and unconditional. And when the storms raged in my life, when the waves broke over the bows of my boat, when the waves whipped my ship, when I thought I was going to sink, I clung to a mast in the midst of it all that got me through the wildest nights. Seeing my friends swim through something similar, I told them there’s a God that loves them as daughters right there, right then, exactly as they were in the middle of that tent. And He won’t crack or bend or break. He’s the one thing they could hold onto that would never fail them in the time they needed it most.

One of them had strict, judgmental parents of conflicting religions, and the other had abandoned church a long time ago. But they felt something in that moment different from what they had experienced before. They felt a comfort and a love they found nowhere else in the festival. And they felt the warmth of hope kindle inside their souls when they were growing numb to the coldness of indifference. They walked away refreshed and recharged, smiling and self-confident to face the challenges their world had waiting for them at the exit.

In the course of two hours, I watched two girls walk into my tent totally deflated, and after we prayed together and asked God to show up, they walked out with a complete emotional and spiritual 180. Whether you believe it was God that moved in their hearts and in their lives is up to you. What I can assure you, though, is that God doesn’t see homosexuals and Christians as oil and water. He didn’t see this Afghani policeman and a couple assumptive haters duking it out. He saw three people mixing and loving and sharing hope and talking about Him. He sees us all as His sons and daughters. And if we were to take that perspective on this, I think we would create–together–a mix more beautiful than our solutions separately.

Warped Journal – Two Lesbians and a Christian in One Tent2014-07-092014-11-14https://8tj6yjstus44zgya1unqg0il-wpengine.netdna-ssl.com/wp-content/uploads/2015/05/HS-logo-normal-size-200.pngHeartSupporthttps://8tj6yjstus44zgya1unqg0il-wpengine.netdna-ssl.com/wp-content/uploads/2014/07/nate-chrisitan-lesbians2-220x150.jpg200px200px
About
Nate Hilpert
Project Manager for @heartsupport Called to help others live a freer, fuller life
Showing 8 comments