His words almost whisked away in the warm Florida wind. He said them so flippantly they almost lost their weight. We sat in the dewy grass in front of a placid lake behind the bus lot. The stillness of the surface was almost serene even though Warped Tour 2013 raged on in the background of our conversation.

His parents physically and verbally abused him his entire childhood. He grew up with parents who wished he was never born and told him to kill himself every day. Somehow he’d survived eighteen years without successfully doing it, and his parents haven’t contacted him since he ran away a couple years back.

I looked into his tired face. His eyes sagged with the weight of apathy. His voice monotone from the indifference. His story had no emotion because he felt nothing. Just anger. At people, at himself, at life. Life fucked him, and it owed him something, but it was too selfish to give him anything. He felt victimized at every turn. No power, no control.

Warped Tour ended, and over the course of the next few months, he was given several opportunities to get back on his feet, get a job, start a life, but he didn’t have the wherewithal to take advantage of the leg up. He ended up at the bottom. And one afternoon, I got a call from him.

“I checked myself into the hospital because I can’t stop thinking about killing myself. If I didn’t, I would have done it.”

I parked my car in a Walgreens parking lot and sat dumbfounded. Not because this was implausible but because I felt the true weight of helplessness welling up in my gut. I thought of the million things I could try to say–the million things I wanted to say. And it wouldn’t have done a thing. His mind had been so tortured and tormented and twisted that no arsenal of words I could launch at him could possibly blast their way through to his heart. He was lost. I couldn’t find him. He was helpless, I was powerless, and it was one hopeless mess.

I felt desperate to do something, anything to help him. I had no where else turn, so I prayed. I said, “God, he’s too far gone for me to help. But I know you have the power to change even the worst of the hopeless. And you can change him. So please, God…do it.”

Over the next several months, I checked back periodically, but his life seemed to be on the steady decline. Emotionally stagnant and dying, homeless and couch surfing, jobless and prospect-less…ever more hopeless. He later messaged me on Facebook and told me he officially had no place to stay, so he took to the streets. And after that, I didn’t hear anything from him.

As Warped Tour 2014 rolled in several weeks later, I saw him from a distance walk into my tent. We hugged and caught up. He definitely smelled homeless–or just like everyone else at Warped Tour. He talked to some people with me out in the crowd, and when we got back to the tent, we sat down in the back, and I asked him how he’s been. He told me what happened after he became homeless.

A few days after living on the streets, someone came up to him and gave him a Bible. He hated religion and hated reading in general, but he heard it worked for some people and decided he would give it a try. He opened it up, and God just started to speak to him through it. He got sucked in and found a glimmer of light in those pages alone under his bridge. He went to a random church nearby and felt every word from the pulpit preached directly at his soul and his situation. People came up to him and gave him money without knowing him or what he was going through. He felt surrounded by some kind of supernatural love. He became eager to read his bible every morning and every night. And in a few short weeks, God changed his life. His heart went from callous to filled with love. He used to well with such hatred for people that he got angry when they sneezed. And something broke in him, and all of a sudden, he couldn’t help himself from saying ‘bless you’. He found himself going against years of habituation, and now he wants to quit drinking and smoking. He found a deeper sense of happiness elsewhere, and he felt less of a need for those things. His heart and eyes changed, and he all of a sudden didn’t see women the same way. He stopped sleeping around with them altogether. He felt this well of gratitude flood within him, and every night when he goes to bed he just thanks God for all that He gives him. He can’t even fathom praying for anything else because he trusts God knows what he wants and continuously provides for him every day with food, good people, and great adventures. He’s even beginning to believe that he has worth because of what he believes Jesus did for him. He feels love again and is able to give it out. He shares his food every day with another elderly homeless man and has compassion for him. He eagerly teaches him everything that he learns in the bible from that morning. More homeless people are coming to him with questions and asking for advice, and he’s giving of himself and of his heart when he used to be closed off to a world that closed itself off from him. 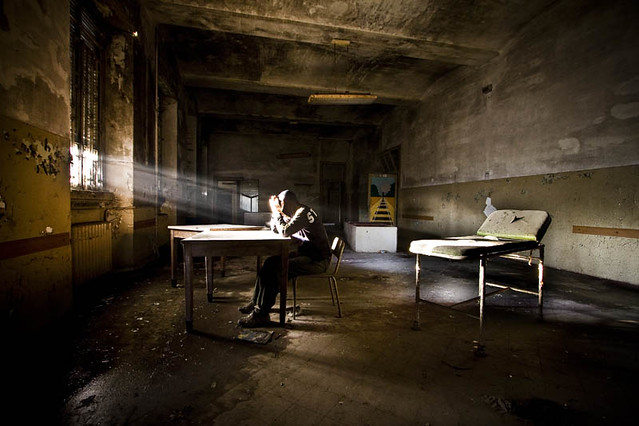 His life completely flipped, and I can’t help but think back to that day in that Walgreens parking lot. I couldn’t shake the feeling of helplessness that I got, and this kid’s only hope was God. I believe that day God heard me ask for Him to rescue my friend…And He did.

The funny thing is–even though I believed every word I prayed, I didn’t really believe it was enough. I never thought God would remember those words. I never thought He was listening. I thought I needed to make more of a splash. I needed to get on a holy megaphone and blare it in the heavens until God did it just to make me shut up.

But I think our God is a God of hope. And I think that even one prayer with that kind of God is enough. Because He’s listening. Because He loves you. And because He can.